Background. Health care personnel (HCP) are an important link in emergency response. Yet, researchers have reported that not all HCP intend to respond when a public health event (PHE) occurs. Ajzen’s theory of planned behavior (TPB) was the theoretical framework for this study. Objective. The objective of this study was to explore factors associated with HCP intentions to respond to a future PHE. Method. The TPB was used to develop the PHE Survey that was distributed via the web to six participating facilities located throughout the United States; 305 HCP completed the survey. The dependent variable was intention to respond to a future PHE. The independent variables were three types of beliefs, attitude, subjective norm, and perceived behavioral control. After outliers were removed, the final analytic sample included 303 HCP. To explore the direct and indirect relationships among the observed variables, I used descriptive statistics, Pearson correlations, bivariate analyses, and structural equation modeling. Further analyses were completed to investigate whether the relationships in the final structural model were moderated by professional affiliation in two subgroups, nurses and other HCP. Results. The item responses and patterns of relationships identified in the final structural equation model implied that the intention to respond was influenced primarily by normative and control factors. The relationship between referent beliefs and subjective norm, and the link between control beliefs and perceived behavioral control were significant. Attitude did not contribute significantly to the prediction of PHE response. The intention of nurses to respond was influenced most by the control factors whereas other HCP’s intention was shaped more by the normative factors. Discussion. HCP believed they had valuable skills and abilities that they could use to provide tangible help to those affected by a PHE. They also believed that their interpersonal, team membership and leadership skills could help them garner support from their colleagues and collaborate with organizations capable of providing the resources needed to bring about a positive outcome. The combination of these factors bolstered the intent of HCP to respond to a future PHE. 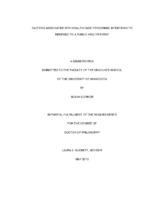