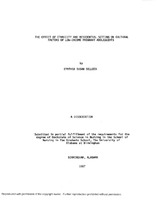 The citations below are meant to be used as guidelines. Patrons must make any necessary corrections before using. Pay special attention to personal names, capitalization, and dates. Always consult appropriate citation style resources for the exact formatting and punctuation guidelines.
Item Information
Item Link - Use this link for citations and online mentions.
http://hdl.handle.net/10755/17018
Abstract
Much research has been conducted on adolescent pregnancy; however, culture, as it relates to adolescent pregnancy, has been cited as an area in need of further study. This research focused on the effect of ethnicity and residential setting on cultural factors of low-income pregnant adolescents. The cultural factors studied were social support, knowledge of prevention of pregnancy, and importance of becoming pregnant. These variables were described and compared in white, black, rural, and urban pregnant adolescents. Relationships among these variables were also investigated. One hundred and nine low-income pregnant adolescents, aged 14-17, participated in this study. The mean age of the sample was 16.1 years. Slightly more than half of the subjects (55%) were white and 45% were black. Additionally, 55% of the sample were urban and 45% were rural. Each subject completed four written questionnaires: a Demographic Data Profile, Norbeck's Social Support Questionnaire, a Pregnancy Importance Questionnaire, and a Sex Knowledge Questionnaire. Descriptive statistics, multivariate analysis of variance, and Pearson product-moment correlations were used to analyze data. Findings revealed that white adolescents had a significantly higher desire for pregnancy as well as more correct sex knowledge than black adolescents. No significant differences were demonstrated between rural and urban adolescents on the variables under investigation. Among white rural adolescents a significant positive relationship existed between desire for pregnancy and knowledge and access to birth control. A negative relationship existed between expectations following pregnancy and self-esteem. For white urban adolescents a significant positive relationship existed between social support and knowledge and access to birth control. A negative relationship existed between desire for pregnancy and self-esteem. For black rural adolescents a negative relationship was demonstrated between social support and self-esteem. Implications of this study involve the need for nurses to be aware of adolescent clients' cognitive level, support systems, self-esteem, sexuality knowledge, and attitude toward and desire for pregnancy. Recommendations include the need to further investigate adolescents' desire for pregnancy, the effect of self-esteem on pregnancy, and the relationship of cognitive level to the use or non-use of contraception.
Description
This dissertation has also been disseminated through the ProQuest Dissertations and Theses database. Dissertation/thesis number: 8723947; ProQuest document ID: 303473411. The author still retains copyright.
Repository Posting Date
2019-03-01T20:03:22Z
Notes
This item has not gone through this repository's peer-review process, but has been accepted by the indicated university or college in partial fulfillment of the requirements for the specified degree.In all cases this material has been filmed in the best possible way from the available copy, however there are the following issues: Pages with black marks, not original copy; Indistinct, broken or small print on several pages
Type Information
Category Information
Degree Information
Rights Holder