The Relationship of Organizational, Personal, and Interpersonal Factors to Role Conflict, Role Ambiguity, and Role Strain in Head Nurses 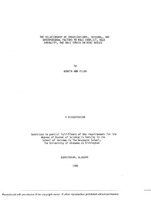 The citations below are meant to be used as guidelines. Patrons must make any necessary corrections before using. Pay special attention to personal names, capitalization, and dates. Always consult appropriate citation style resources for the exact formatting and punctuation guidelines.
Item Information
Item Link - Use this link for citations and online mentions.
http://hdl.handle.net/10755/17000
Abstract
This study described the relationship of organizational interpersonal, and personal factors to head nurse role conflict, role ambiguity, and role strain. Data were collected from 195 head nurses employed in 17 Alabama hospitals. Personal characteristics measured included age, experience, education, and personality. Organizational characteristics measured were hospital bed size, hospital financial base, clinical area, type of nursing care modality, number of employees supervised, number of role sender groups, and number of non-subordinate role sender groups. The interpersonal factor of leadership style was measured. The dependent variables were role conflict, role ambiguity, and role strain. Role episode theory guided the study. Data were analyzed using chi-square tests, bivariate correlation coefficients, and multiple regression procedures. Based on the findings, the following conclusions were drawn: (1) The majority of variance in subjects' role conflict, ambiguity, and strain scores was unexplained by the variables tested. (2) In sub-sample tests on subjects with 2 years or less experience, the amount of variance explained relative to conflict and ambiguity was greater. (3) The variables influencing the occurrence of role stress or strain changed over time, some more strongly related to the phenomena early in the position, others emerging as strongly associated later. Implications from the study included: (1) Nursing administrators should be aware that head nurses are at risk for role stress and strain. (2) Within the practice setting support systems should be identified and utilized to help head nurses cope with role demands. (3) Educators should introduce more managerial concepts and behaviors to student nurses to prepare them for the resource manager role. Mastery of delegation, organization, planning, and group leadership skills is important to the clinical nurse. These skills later became the basis for successful enactment of the head nurse role. Earlier socialization to the manager role may lessen the potential for role stress or strain. (4) Further research is needed in several areas: (a) replication studies, (b) extension of the present study, and (c) development of experimental designs. Further refinement of the proposed model for head nurses can then be accomplished. Manipulation and control of factors associated with head nurse role stress will then be possible.
Description
This dissertation has also been disseminated through the ProQuest Dissertations and Theses database. Dissertation/thesis number: 8823593; ProQuest document ID: 303678542. The author still retains copyright.
Repository Posting Date
2019-03-01T15:39:50Z
Notes
This item has not gone through this repository's peer-review process, but has been accepted by the indicated university or college in partial fulfillment of the requirements for the specified degree.In all cases this material has been filmed in the best possible way from the available copy. However, there are pages with black marks, not in original copy, indistinct, broken or small print on several pages, and curling and wrinkled pages.
Type Information
Category Information
Degree Information
Rights Holder